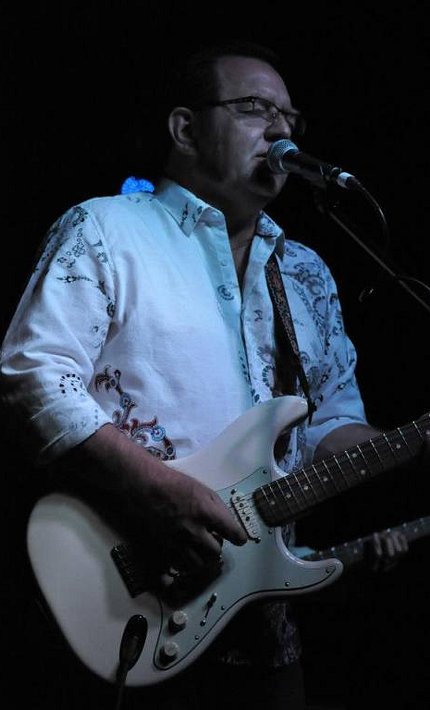 Granvil Poynter developed his blues based sound in the roadhouses of his native Arkansas and in the bars and juke joints of the Lone Star State. His gateway to the blues was the incredible work of popular artists Eric Clapton and Stevie Ray Vaughn, and once he got a taste of this he dug deeper and discovered the marvel of the old school masters, including Muddy Waters, Albert King, and John Lee Hooker. Granvil and his band deliver some seriously sizzling chops that make die-hard blues fans holler for more!  Even though he is known as a master of the less is more approach to blues, he also delivers fierce single-string savagery that makes for a truly satisfying night of entertainment. Here is what one fan had to say after hearing Granvil play one night at Antone’s Nightclub

“While I don't have many words to capture what your music accomplishes, let me say that your voice (and ASS-KICKING instrumentals) convey the human situation: the longings, the feelings, the struggles, the hopes....you are getting at what it means to be someone and try to get up each day and push the rock forward.”

Granvil’s album “Another Day Singing the Blues” consistently wins new fans. After winning blues awards, opening up for ZZ Top with ace drummer Raul G. Garcia and earning praise and admiration from the iconic Billy F. Gibbons. Granvil and the band are working on a new album steeped in blues with explosive sonic sounds worthy of admiration from guitar geeks and blues fans from across the universe. Stay tuned for blues madness!

Granvil continues to play venues and festivals in San Antonio, Austin and across the United States continuing to keep the Blues alive and well with his excellent sidemen thunderous drummer Raul G. Garcia and rocking bass man David Meissner all musicians of extraordinary talent and ability.


In the Blues the Musician Tells a Story

and Lives the Story Thru His Music